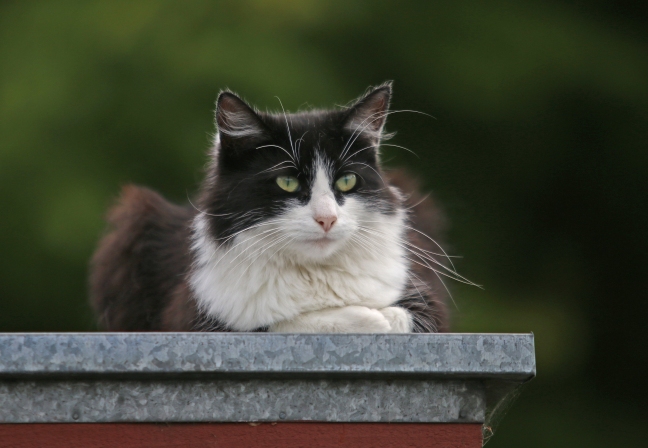 Don’t I look good sitting up there? Stella the sentry you can call me.

I was sitting on the roof of the carport when my human parents went out for some Saturday morning shopping, and when they got back, I’d really taken up residence, making sure nobody came near the house who wasn’t allowed to. A veritable watch cat.

I’d have been good and ready if anyone had come wandering onto the property. I’ve got a bit of a reputation around this place as a tough nut. Some of my younger semi-siblings – we’ve got the same cat mum, Malcolm – seem to be a bit scared of me, although I helped look after the three of them when they were kittens.

When we get called in for food, Molly and Daisy steer clear of me, as if they think I’m going to give them a hard time, which is probably because I sometimes do; Bryan as well, that boy who thinks he’s the boss around here. We’ve had a couple of impromptu boxing bouts in the kitchen when there are tidbits being handed out. 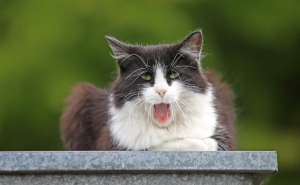 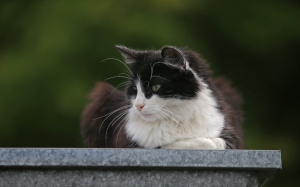 But I mean, really, when you look at those two pictures just above this line, can you honestly believe I’m that grumpy? I’m actually the most talkative of all the Seaview 6, with a really high-pitched, feminine meow. Sometimes my Mum – the human one – will say “Sing, Stella, sing us the song of your people”. I bet you don’t know too many cats who can do that. Misunderstood, that’s me.

I’m pretty outgoing too. I’ve been to visit quite a few of the neighbours around here, and one morning, when Dad went for a walk, I went with him. We went all the way around the block, with me walking alongside him. For some reason he kept saying “Stella, you need to go home. Come on!”. But I was enjoying it too much.

When some people came out of one of the nearby houses, the woman said to Dad “are you trying to go for a walk?” and he made some lame comment that suggested he might prefer to be walking on his own. Why on earth would he want to do that?

Anyway, if you happen to pop around at any time, I’m likely to be the one on top of the gatepost, or the carport. But don’t worry, I’m really friendly. You shouldn’t believe everything you hear about me.